The Upperdark extends from the surface to a depth of about 3 miles. Travel here is relatively easy. Thanks to millennia of natural processes, volcanic activity, burrowing creatures, and various races cutting trails through the rock, multiple paths to a single location typically exist. Basic amenities such as light, air, food, and water are less available in the Upperdark than on the surface, but they are common enough. Vents from the surface keep air fresh and moving in the passages, so air quality is rarely an issue. Luminescent flora and fungi provide occasional light, though not consistently enough to allow a creature without darkvision to travel without an independent light source.

Enormous underground lakes spread across hundreds of miles in some regions, and water trickles down from the surface in many others. Many water sources are guarded or fouled, but quite a few are both clean and open for anyone to use. Many different types of wild fungi are edible, and the Underdark equivalent of small game (rats, dire rats, lizards, and giant vermin) can easily be found in the tunnels. Domesticated animals, such as deep rothé, can also be found near most major population centers.

The main import from the surface is slaves. Slavers from evil-aligned cities in the Upperdark make frequent forays into the light to capture new slaves for use as either labor or food. They also trade for textiles, grains, fruit, and weapons. Their exports include raw ore, refined metals, gems, and native Underdark plants. Scouts from deeper areas often venture into the Upperdark in order to trade with (or prey on) the races native to this area.

The Middledark lies between 3 and 10 miles beneath the surface of Faerûn. Settled communities in the Middledark commonly send trade caravans and raiding parties to the surface, or at least up to Upperdark trading centers such as Menzoberranzan and Ooltul. Visitors from the surface are rare and tend to be viewed as potential slaves or food. Caravan travel brings mostly luxuries; staples must be grown locally. Travel in the Middledark can be difficult. In many cases, it’s simply not possible to go from one place to another because no caves or tunnels lead in the right direction. To overcome this drawback, many of the races that dwell at this depth are prolific portal builders and tunnelers. The Middledark is, at its best, worse than the harshest surface deserts. Wild resources are hard to find, and most of those that do exist have already been placed under guard by someone else.

Glowing fungi and lichens are less common at this depth than they are in the Upperdark. They can be easily cultivated, but most concentrations of them appear in cities, not in the wild. Air tends to be stale, but breathable, though poisonous fumes choke out normal air in a few areas. In many places, water is scarce, and any large supply is well guarded. Creatures living at this depth get most or all of their water from the fluids in other creatures they eat. Food is the most plentiful of the necessities at this depth, but even that becomes an issue at the lower end of the depth range.

No place on Toril is as strange and dangerous as the Lowerdark. This level of the Underdark extends from 10 miles below the surface to unfathomable depths and features a degree of strangeness that would drive most surface dwellers insane. Few upperworlders ever descend to the Lowerdark, and some deny its existence; reciprocally, few of the Lowerdark’s denizens want anything to do with the surface world. Some of the creatures in the Lowerdark—intelligent or otherwise—aren’t even aware of a surface world; others have heard of it but consider it a mythical place. Most of the Lowerdark’s denizens are chaotic, evil, or both. Even the vermin and animals encountered in this area are rarely ordinary—many have been transfigured by crossbreeding or magical interference. Nothing here is normal or simple. Travel is arduous at best. The term Lowerdark actually refers to many places, since the great domains of the Underdark possess fewer and fewer interconnections the deeper one delves. Many locations are reachable only via portals or other teleportation magic.

The Lowerdark is a strange realm warped by severe environmental and magical forces. Natural light sources fail with unnerving frequency. Resources are scarce, and control of them is continually contested. Air does filter down this far, but it is frequently stale and occasionally toxic due to geothermal fumes. Drinkable water and food are near impossible to find. Exacerbating these problems still further are reports of numerous areas of wild magic and dead magic. The Weave in the Lowerdark is a snarled, tangled mess. Why would any creature with intelligence or common sense live in such a terrible environment? Of course, not everyone ends up in the Lowerdark by choice….

The Sword Coast in northwestern Faerûn is a prominent trading area and hub of civilization on the planet Toril. However, metropolises in this region are few and far between. The largest city immediately accessible to the players via land travel in this particular region of the Sword Coast is Neverwinter, the Jewel of the North. 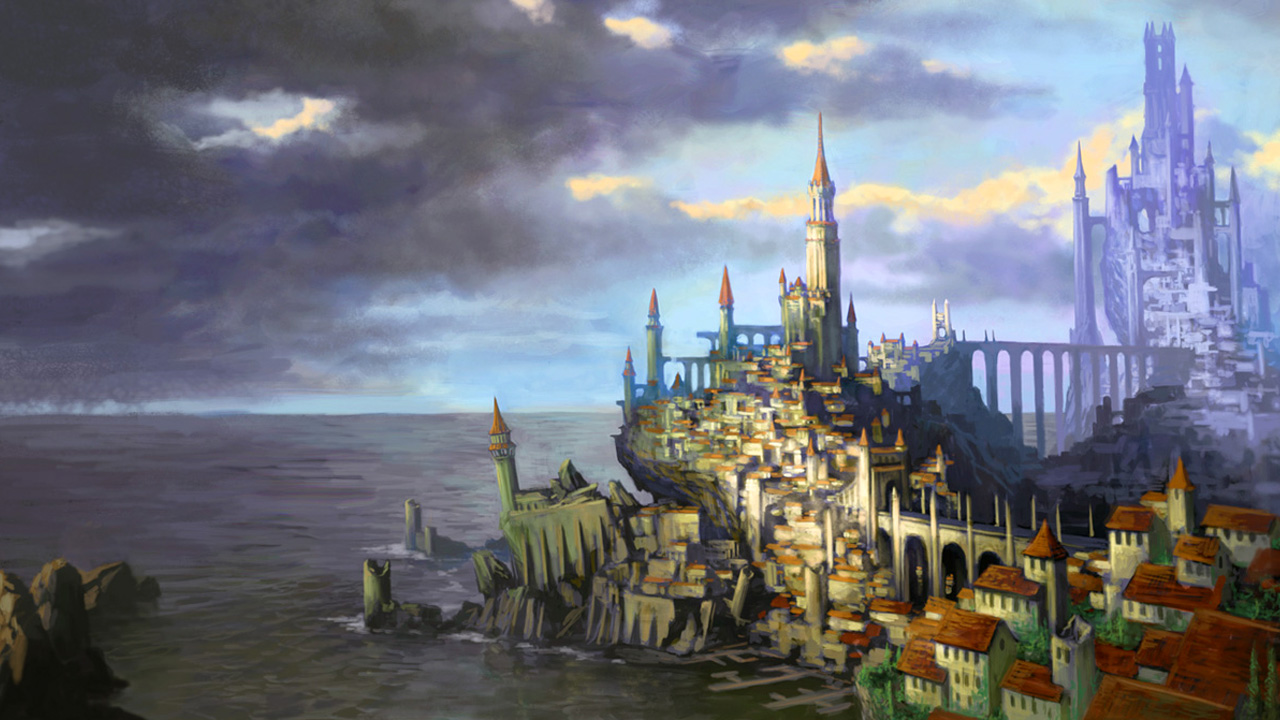 Rising from the broken coastline of the “Savage North,” as it is now more commonly known, the frontier city of Neverwinter has weathered calamity after cataclysm, yet remains standing. Its inhabitants are hardy and optimistic.

Lord Dagult Neverember—once Open Lord of the cosmopolitan Waterdeep—has recently settled in and unofficially named himself Lord Protector of the city of Neverwinter, and he is slowly rebuilding its residential districts and defenses after an earthquake leveled the city thirty years ago. Neverember’s stabilizing presence, as well as his policy of few trade regulations and low tariffs, have drawn merchants and longtime residents back to the city. Among these merchants are wealthy expatriate traders from faraway lands, such as the Cormyrean Elden Vargas, whose trade fleet makes berth in the city, and the elegant Lady Sala Nidris from Calimshan, who brings spices and fine fabrics from the south.

Despite Lord Neverember’s success, much of the city remains untamed and wild, and danger lurks in cracks and crannies. A contingent of Thayans is the most obvious threat to Neverwinter, but rumors speak of werebeasts in the sewers, ash zombies and shades in the great forest to the east, and the reemergence of a powerful devil cult: the Ashmadai.

The High Road that passes through this city leads north to Luskan, and down south, through the Sword Mountains, to Leilon and the city of Waterdeep. To the east lies Neverwinter Wood, where the Neverwinter River emerges from a neighboring volcano, home to a large population of fire elementals who warm the Neverwinter River to the point where it has never freezed over—even when the volcano erupted almost forty years ago, loosening ash that blocked the sun.

These locations are part of the Forgotten Realms. However, in the Sword Coast, relatively little is known about the outside world, and eyewitness accounts of what has happened in the past few centuries often conflict. People are more sure of their knowledge regarding the gods and magic than they are of their own historical narratives (or geography).

The Western Heartlands encompasses a narrow strip of civilization running from the Sunset Mountains to the Sea of Swords, and northward from the band of territory marked by the Cloud Peaks and the Troll Mountains to the Trade Way (SCAG 7).

The shores of the Moonsea have long been home to cities that rise swiftly, relying on vigorous trade and gathering powerful mercenaries to their banners, only to overextend themselves and fall—sometimes crumbling over time, and sometimes dropping like stones from the sky. Now that Netheril and Myth Drannor have fallen, those two great powers can no longer exert their influence over the Moonsea, allowing the city of Hillsfar to spread its wings and eye southward expansion, and Mulmaster to once again further the worship of Bane. Phlan, Teshwave, Thentia, and Voonlar—all Moonsea cities where greater powers jockeyed for influence—now work to find their own identities before an unchecked or malevolent realm swallows them, one by one. This region is also home to the ruins of the Citadel of the Raven and Zhentil Keep, former strongholds of the Zhentarim, which the Black Network shows occasional interest in restoring. (SCAG p. 12)

The Forgotten Realms contain many gods and many believers. Divine spellcasters, like clerics and druids, call upon the gods to manipulate the Weave, a field of magic which exists throughout Faerûn. Arcane spellcasters (like wizards, warlocks, and sorcerers) do not need to proselytize in order to practice their spellcraft, but they probably hold reverence to at least one or two gods, due to their upbringing and their surroundings. Consider which deities from which Pantheons your character might worship. They hold reverence for at least one member of the Faerûnian Pantheon (which is a catch-all term for the major deities), and may worship some or all of the gods in the minor Pantheons:

You gain the ability to speak, read, and write languages due to racial traits, certain class and background choices, certain feats, or divination magic.

A typical creature in the worlds of DUNGEONS & DRAGONS has an alignment, which broadly describes its moral and personal attitudes. Alignment is a combination of two factors: one identifies morality (good, evil, or neutral), and the other describes attitudes toward society and order (Iawful, chaotic, or neutral). Thus, nine distinct alignments define the possible combinations. An unaligned creature is one that lacks the ability to comprehend the difference between good and evil, law and chaos.

These brief summaries of the nine alignments describe the typical behavior of a creature with that alignment. Individuals might vary significantly from that typical behavior, and few people are perfectly and consistently faithful to the precepts of their alignment.

The known player factions are organizations that have risen, been shattered, and risen again several times. Whether noble warriors, rugged survivalists, or deceptive agents, your choice to join a player faction will help shape your involvement in the game’s ongoing story.

Ascendant campaigns can view previous versions of their pages, see what has changed (and who did it), and even restore old versions. It's like having a rewind button for your campaign.

We've already been saving your edits, so if you upgrade now you will have instant access to your previous versions. Plus, you get a 15-day free trial, so there's nothing to lose.

I'm sorry, but we no longer support this web browser. Please upgrade your browser or install Chrome or Firefox to enjoy the full functionality of this site.